Colorful and Unique Fishes of the Andaman Island

Andaman is a place of natural beauty with a plethora of fish species which you don’t even know until today. Sheer Joy of ogling and comprehending the nature’s most stunning creation i.e. the fishes is one of the advantages of the Andaman Islands.  If you are ready to explore the water world then there is no other place as the Andaman and the marine life makes it even more alluring. There is a wide array of Fishes in the Sea and in this article, we will discuss few of the common fishes like: 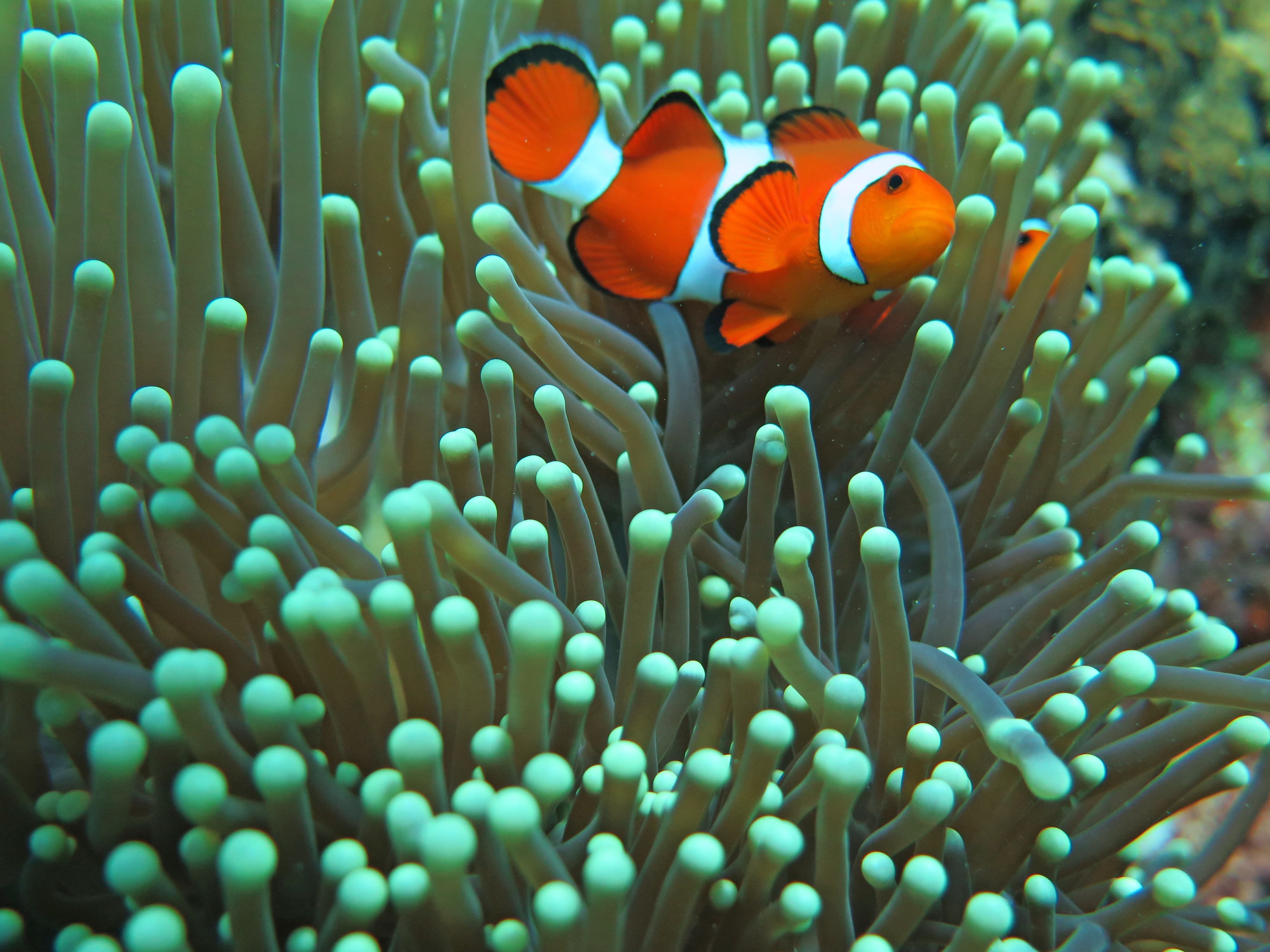 Also known as Common Clownfish or False Percula Clownfish (Amphiprionocellaris) is a very popular aquarium fish. It is easy to maintain, breed and entertaining. These are mainly harmless fishes in orange colour with three white stripes and swim in up and down motion. 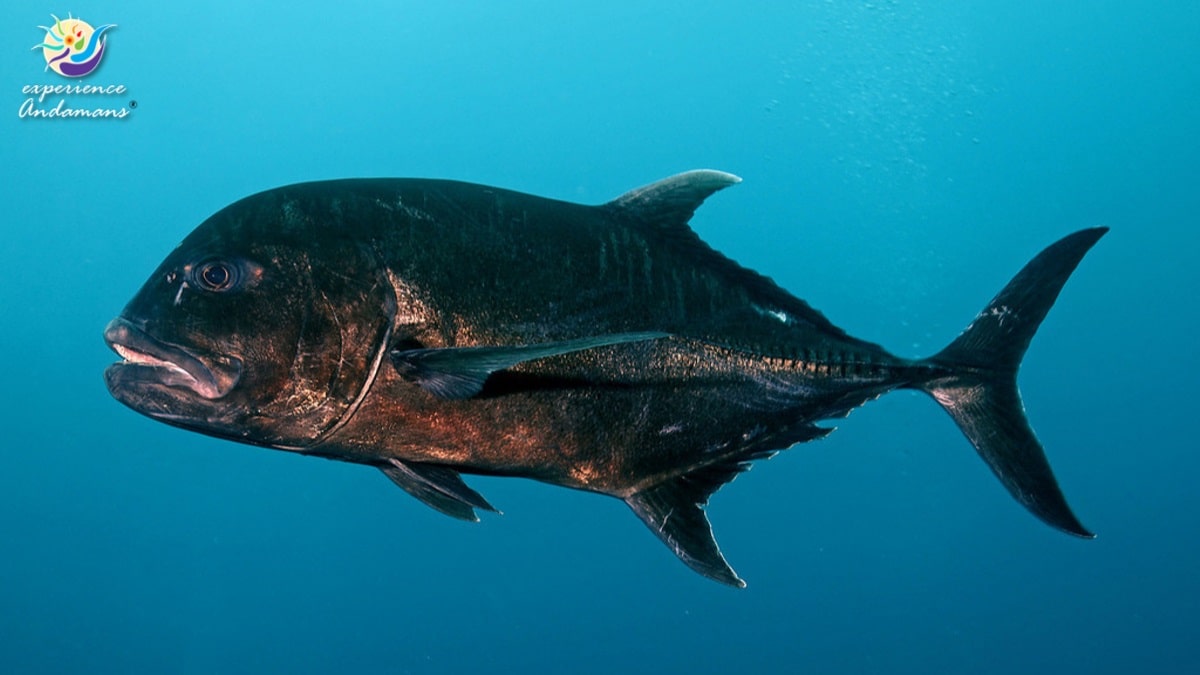 Known as KOKARI by the natives of Andaman, it is the largest of the jack family. GT’s of the Andamans are known as tournament size as they can grow over 200 lb and plunge the surface waters of reefs around the islands. It is a thrilling experience for the fisherman to catch this fish as it gives a tough fight and watching it being caught is a sight in itself. 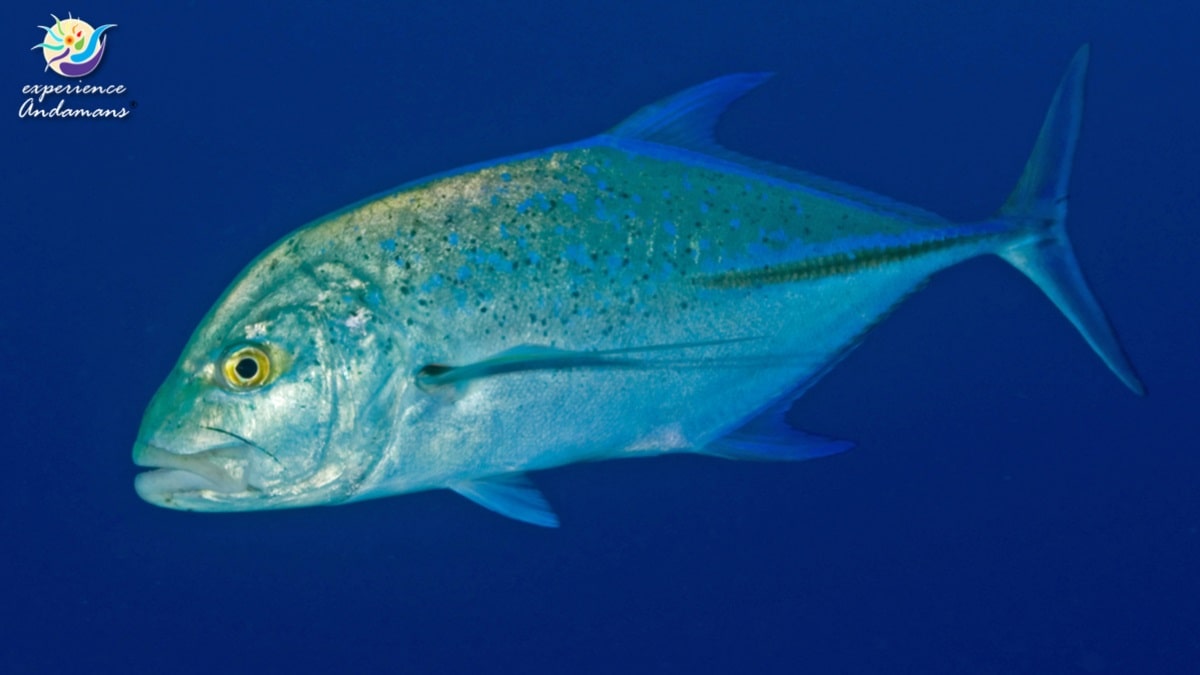 Also known as Neel KOKARI by the Andamanese, it is a fish usually found in schools and can be kept only in large water aquariums as it takes time to adapt. It weighs around 10lb to 40lb and is a strong predator. It gives a hard fight while being caught and loves the bait and lure strategy. Due to heavy demand for this fish in the foreign market people have started breeding this fish and the reproductive rate of this fish is fairly high. 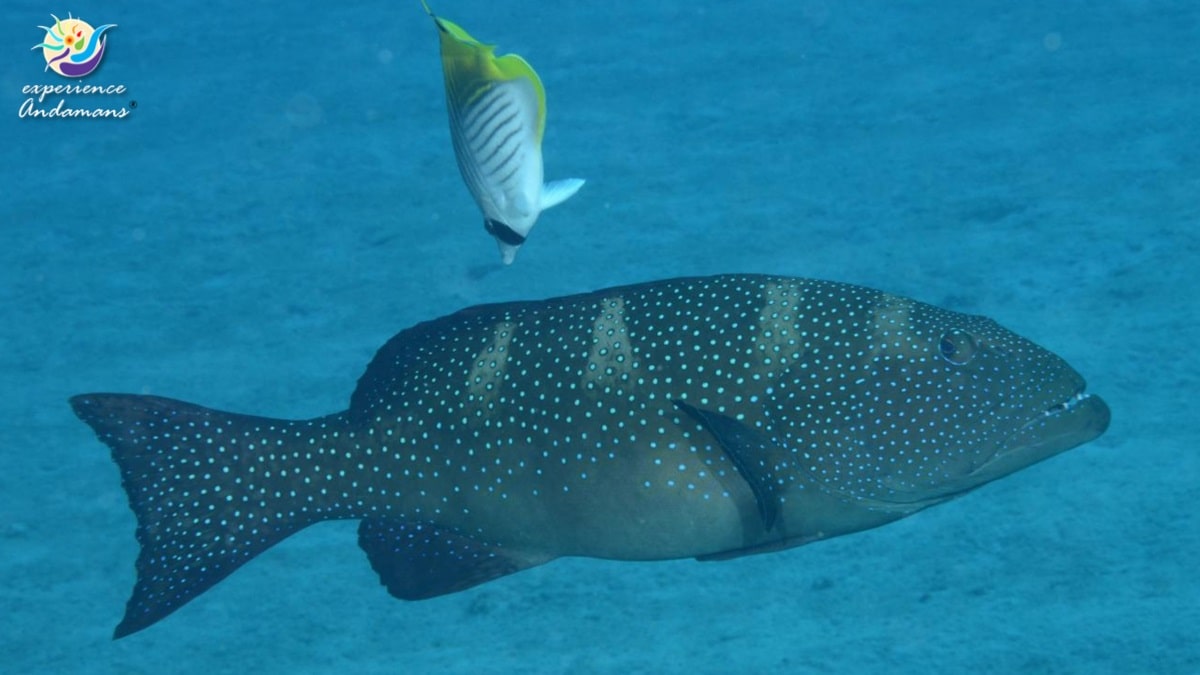 Also known as the Leopards of the reef is from Serranidae family and are expert in disguising themselves between the coral reefs and they find their baits hiding in the reefs. One of the astounding features of this species is that their colour varies at different intervals of the day and capturing them is not an easy task. They are fast and use every pound of their weight to fight and escape from the shackles. 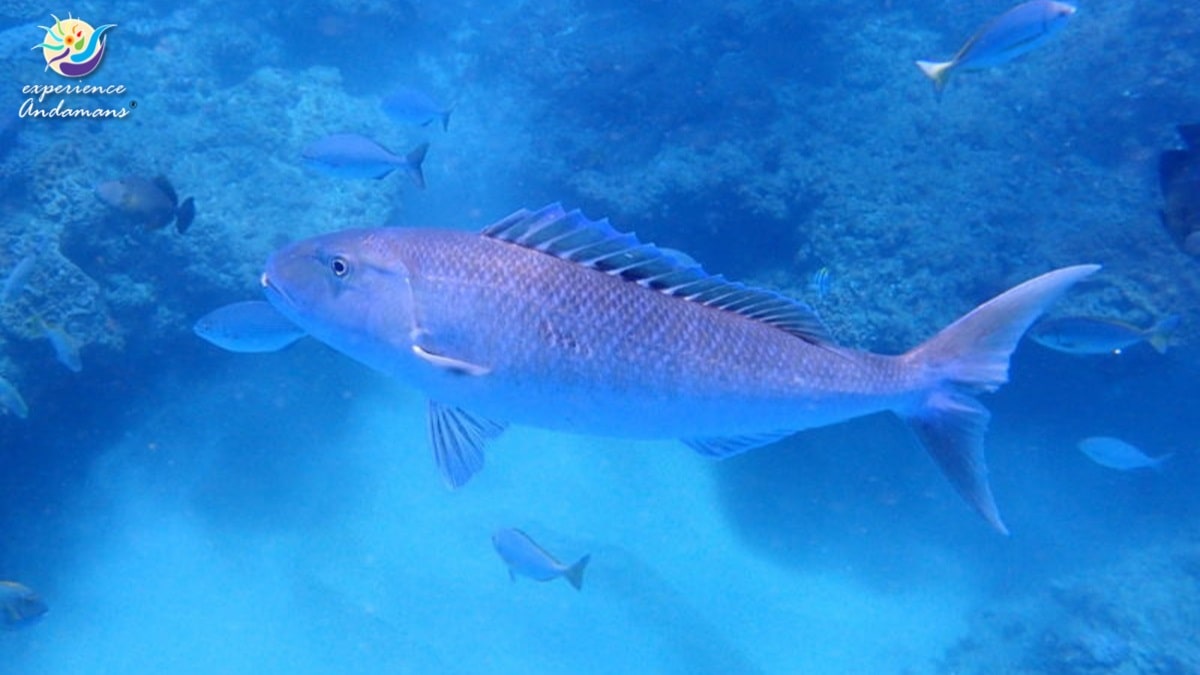 It is a beautiful looking fish from the snapper family. It is famous as a game fish and has high demand in the aquarium trade. It is a predator of reefs and is known for its speed and fighting skills. 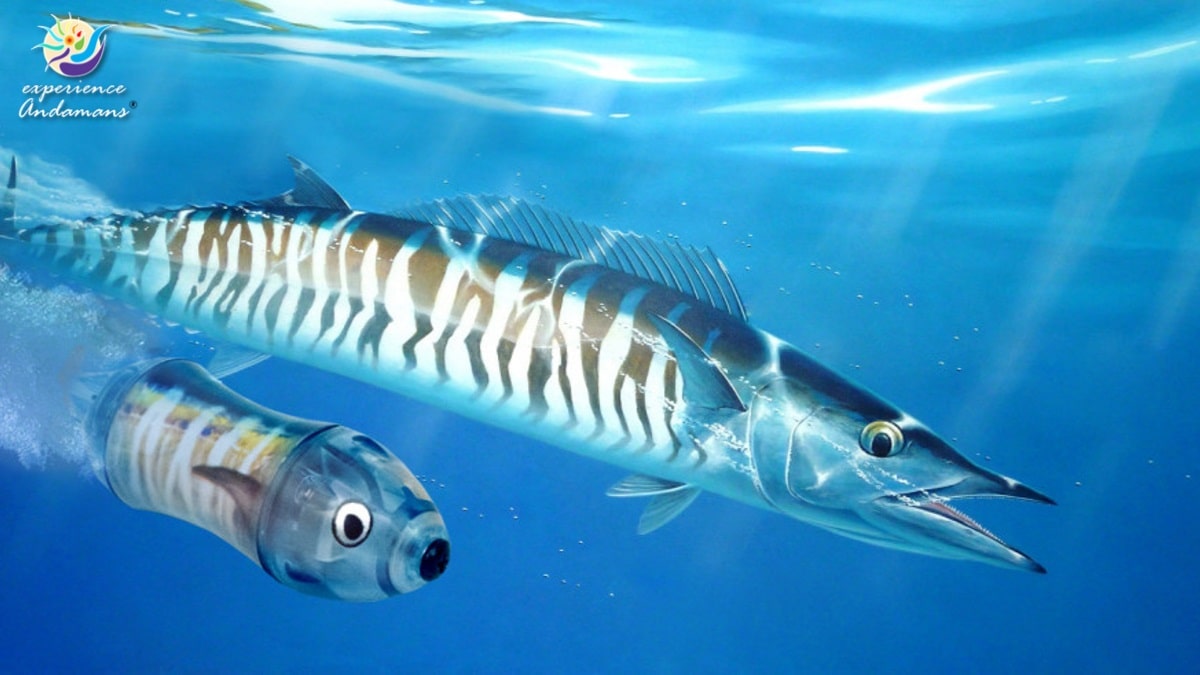 It is known as KAW-WA SURMAI by the islanders and is mostly found in blue waters. It is one of the fastest fishes in the sea but sometimes comes in shallow waters to catch their prey. It weighs around 70 pounds and is a priced possession for any fisherman as it is not easily caught because of its weight and can drag the bait easily. 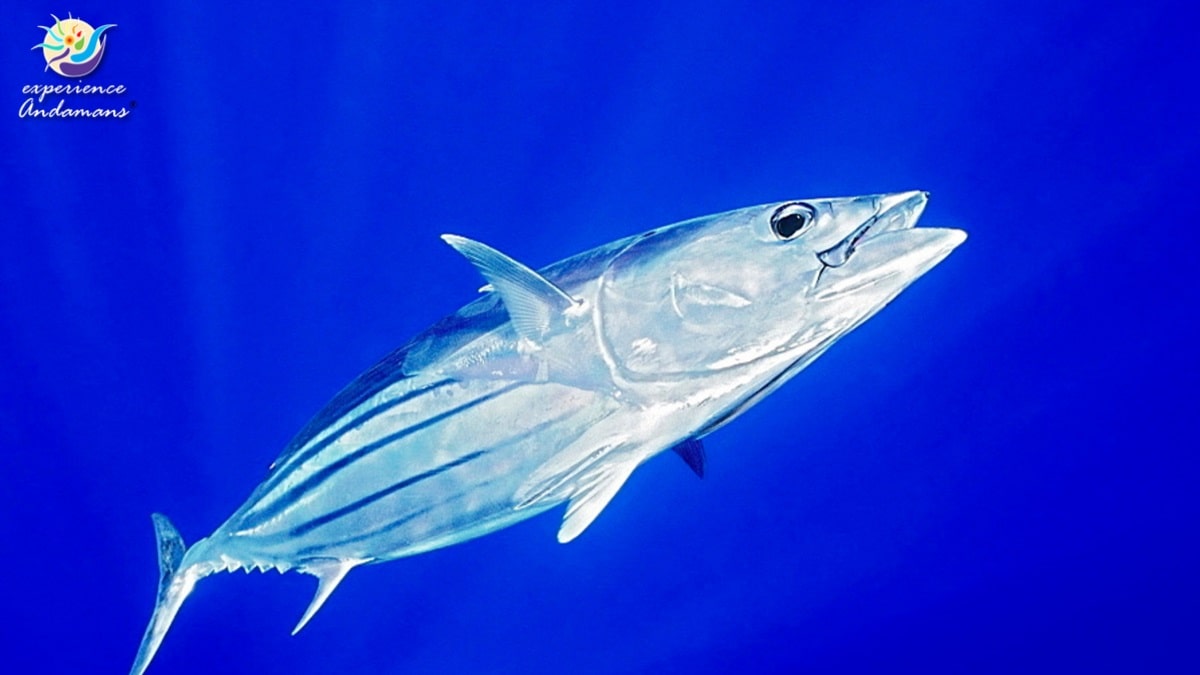 Apart from being an amazing fish to eat, it is one of the beautiful fishes and widely available in the Andaman Islands. Its heart is thrice the size of the body and that is why it can pump more blood. It gives Tuna energy to put up a fierce flight and swim with full force even in long distances.

The Barracuda fish weighs over 45kgs are hard fighters as they take advantage of their weight to escape. Used in variety to eat, it cannot be kept in school or aquariums. It fights with high jumps and changes colors into neon shades and have a life of 5 years approx. The biggest of these in the virgin and uncontaminated waters of the Andamans are a great item to eat. 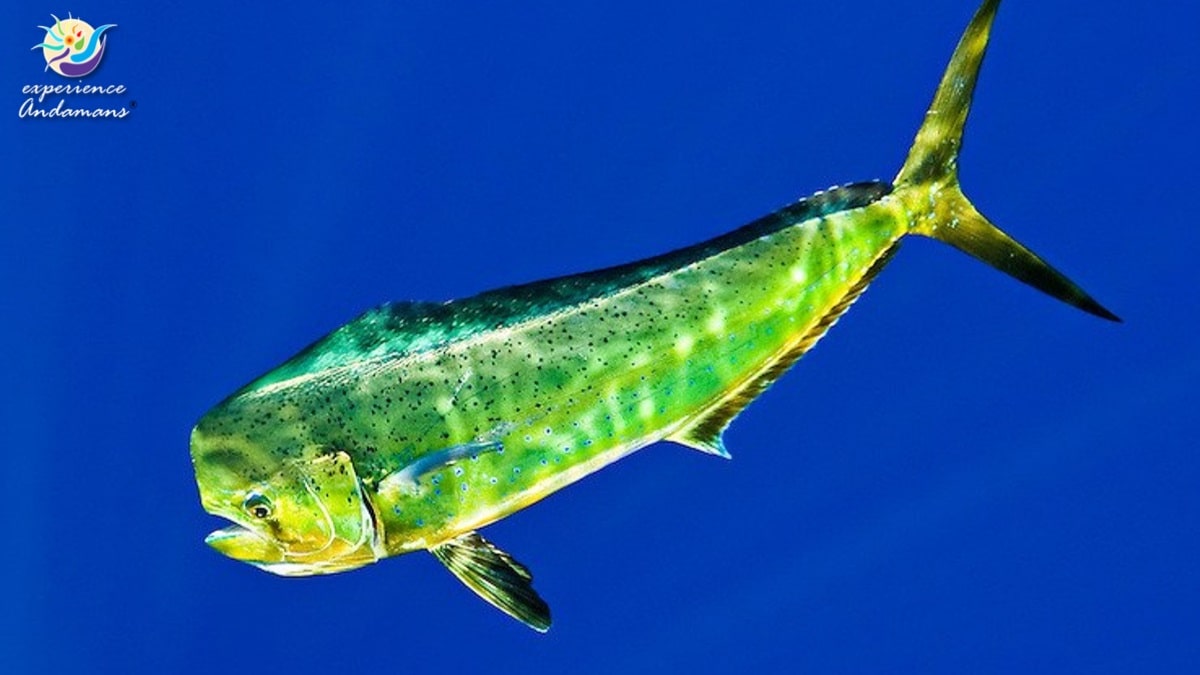 Also known as Dolphin fish or Mahi Mahi is known as HAATHI KOKARI by the natives. It is one of the most popular offshore game fish. One can easily differentiate between males and females as the males have their forehead flat. This fish usually weighs up to 80 lbs and strive hard to break away from the clutches of the fishermen. It is one of the high in demand fishes in the food industry. 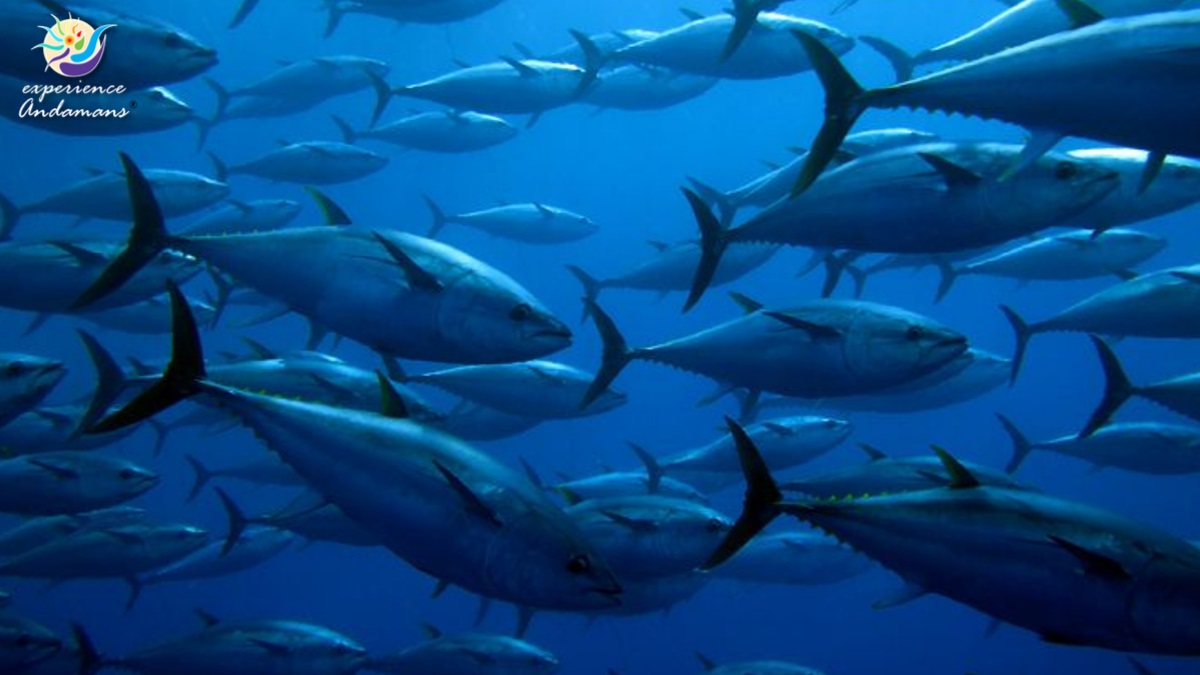 King Mackerel is popularly known as Surmai by the natives of the islands and they are the leaders of the Blue waters. They grow up to 2 meters in size and weigh up to 70 LBs are perfect predators and fishermen’s pride. It is considered main attraction of the Andaman Islands as it is not easily found and magnificent in its own way.

Popularly known as Sailfish have sword like bills which it uses to threaten the baits and attackers. It is in dark blue colour from the back and silver whitish colour belly and normally weighs 110kg and is around 3m long. It is used as a famous delicacy in Andaman but is not easy to catch.

Not just beautiful, though—the fish are like the stars in the sky but alive and breathing. And they’re watching you. Every fish is a soul blossoming in nature and thus it is the nature’s way of saying, ‘Let’s party!’ There is bliss on the lonely shore of Andamans where no one intrudes, by the deep sea, and music in its roar.

Once you will visit the Andaman Islands you will fall in love with the serenity and water kingdom. The diverse flora and fauna underwater should not be missed and the trip to islands is considered complete only when the tourists dive into the depths of blue water and experience the magnanimity in the depths of the ocean.